Paul Nichols has transformed his fairly typical suburban yard into a pollinator garden comprising around 450 different native plants. In so doing, many wonderful things happened, especially for neighborhood pollinators and birds who benefited greatly. Paul said that his goal hsd been to “mimic a wide array of habitat types in my vicinity. Many of the plants are similar to those I see when I go for walks through the trails in my community and I’ve made an effort to have a diverse range of native plants to support as much wildlife as possible.“ “I use my newly learned expertise to start native gardens at the two schools I teach at while teaching my students about their importance.” 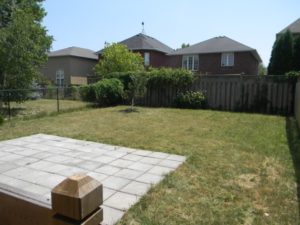 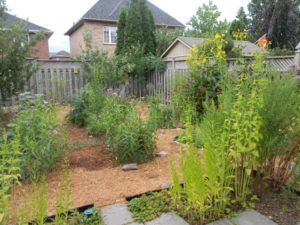 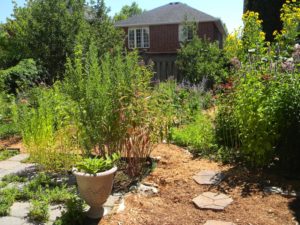 Angelique-Marie Mori for her commitment to maintain and restore the natural ecology of her Hamilton area property thus providing a suburban oasis for local native flora and fauna. Alan Bell for his dedication to create an urban oasis for native plants and a viable habitat for pollinators and birds. Paul Foster for his commitment to create an oasis for native plants and showcase an alternative to lawns and concrete in a busy urban environment. The Peterborough GreenUP Ecology Park is a five-acre showcase of sustainable landscape ideas and resources that include a host of display gardens and naturalized areas, a native plant nursery, children’s programs, garden market, skill-building workshops and hands-on displays. The park includes everything one would need to be good steward of the land.

Ecology Park has its roots in Peterborough’s East City at the Rogers Street Community Garden. After a couple of years the garden outgrew the space as eager gardeners wanted to expand into growing trees and shrubs. The goal was to get Peterborough residents thinking not only about growing food for humans, but food for all living things and creating and protecting habitat at the same time. The City of Peterborough Parks Department offered the current five-acre parcel of land in Beavermeade Park. The original garden was moved to its current home in 1993, and has been flourishing ever since. 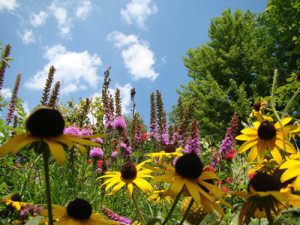 The Loretta Maryholme Spirituality Centre, Roches Point, Ontario lies at the south end of Lake Simcoe. Over the years, the Loretta sisters have undertaken numerous habitat restorations at this site, ranging from a protected naturalized shoreline, a pathway through the woods, various gardens and labyrinth, to a beautiful savannah resplendent with native grasses and wildflowers. Their restoration work has become an important part of the Spirituality Centre. Theirs is about honoring the land and creating a sacred space for all by way of conscious environmental practices and initiatives. Their goal is to “establish productive, sustainable ecosystems… which contribute to the area’s biodiversity and ecology”.

The award was accepted by Sister Mary Mallany who spearheads these initiatives, along with two very dedicated volunteers.

Dan Bissonnette, the program coordinator for the Naturalized Habitat Network, accepted the NANPS Garden Award for his work on raising the profile of the Pawpaw in Windsor and Essex County gardens. By way of extensive outreach into the community, Dan was able to reintroduce this much neglected indigenous native tree back into local gardens as an environmentally sustainable food source. Community involvement and ongoing stewardship necessary for long-term success evolved out of newly developed educational resources, events and activities. Project Pawpaw has been very well received and has connected with over 150 participants. Dan also created ”The Pawpaw Growers’ Manual for Ontario” to accompany and support both this and future pawpaw plantings.

Gerry Stephenson accepted the award on behalf of the school where he works and where an interior courtyard was converted into a native plant garden. Saint Jean De Brebeuf Catholic Secondary School in Hamilton – Gerry Stephenson described the courtyard restoration which was started in 2008. The clay soil, baked in the sun in the summer was a challenge, and with the help of Ken Parker, a plan was developed. Drought and plants that could survive minimal maintenance was critical to the success of the gardens. With some rototilling, and sand, the grounds were transformed. Plants such as redbud, juniper, dogwood, gooseberry, pawpaw chinquapin oak, American plum, sand cherry, fragrant sumac, elderberries, showy mountain ash, asters, butterfly milkweed, woodland strawberries, jack in the pulpit, and evening primrose all thrive well in this green oasis. All this amazing garden is mainly cared for within six weeks each spring in April and May.

New England Wildflower Society for their Garden in the Woods

New England Wildflower Society was recognized, and a description was given by Deb Dale. Started in 1850, this resource centre and greenspace located in the suburbs of Boston has demonstration gardens, art contests, and educational programs and signage. They even have a jail for invasive plants.

Located at the edge of a small town, Pat’s 1.77 acre property abuts lakefront land once slated for development. For the past 13 years Pat has worked to provide new habitat for local wildlife that seemed destined for displacement. Gradually she has reduced the amount of lawn, provided wildlife corridors between adjacent properties, added ponds and vernal pools.

New bylaws aimed at restricting natural looking areas in this outer suburb are discouraging. NANPS hopes that Pat’s example will motivate more local landowners to stand up for nature in Port Perry. 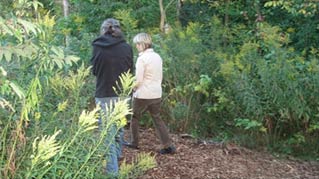 Christina’s garden epitomizes NANPS vision of bringing native plants up front. She has created a gorgeous meadow at the forefront of her property, standing in stark contrast to neighbouring lawns. Nestled at the edge of larger forest, 3 of Christina’s 4 acres are wooded. The remaining acre provides feeding grounds for local wildlife: containing two ponds, 12 bird houses, and a diverse meadow of native wildflowers, grasses, ferns and shrubs. 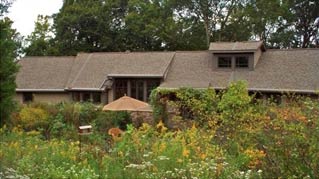 The view from the road now 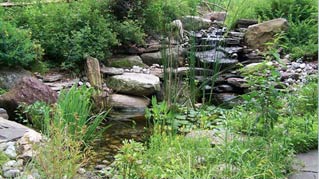 The property has two ponds – both used extensively by wildlife

Christina helped to change the Township’s Weed definition to “any non-native plant” and is fighting a new suggestion that meadow gardens be required to pay for a permit, suggesting instead that lawns be taxed. In addition to maximizing biodiversity in her own property, Christina owns and operates Native Return and has started a charity, east33.org dedicated to improving the environment in the Philadelphia area. 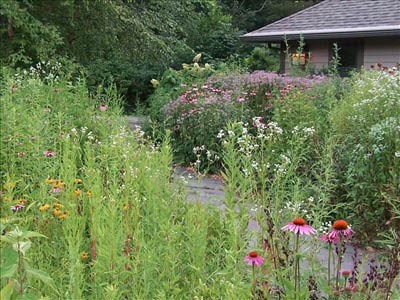 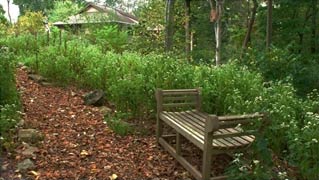 She hopes that soon “the paradigm in landscaping will shift to one more healthy and cost effective for wildlife and people.” 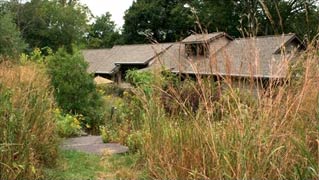 Suggesting instead that lawns be taxed 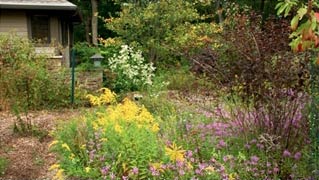