Native plants are fighting a battle for survival. Some combatants are easily recognized…the bulldozer plowing down natural habitat…the industrious gardener poisoning “that patch of weeds” where their property meets the local meadow… Others are more pernicious. Alien invasive plants have been steadily infiltrating North America for hundreds of years, arriving with settlers, imported by garden centers, escaping from our gardens…

Some are relatively innocuous…merely occupying space more usefully filled by native species. A very few even fill a small role in local ecosystems. The nectar of Queen Anne’s lace, for example, is enjoyed by Swallowtail butterflies and dandelions provide flowers for early spring pollinators to feed on.

Many more, however, not only play no part in ecosystems, they out-compete native species to create monocultural deserts. Phytochemicals secreted by some species actually inhibit the growth of tree seedlings and other plants.

How can you help?

Although it is called “Norway” maple, it is actually indigenous to much of eastern Europe and down to the Caucasus. The species Latin name, meaning “like Platanus,” indicates the similarity of the leaves to those of Sycamore and Planetree, to which it is not related.

Norway Maple is a fast-growing maple which can become 30m (100 feet) tall. It has been widely planted as a street and shade tree due to its vigorous growth and tolerance of poor soil, compaction and pollution. 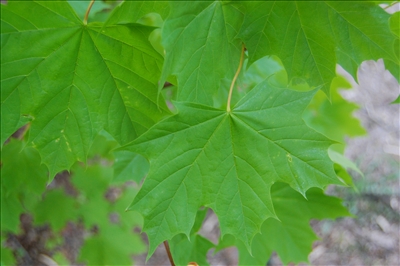 At first glance it looks similar to a Sugar Maple (Acer saccharum), but the leaves are usually wider than they are long, and have more lobes than the Sugar Maple. Fortunately there is an easy way to identify the Norway Maple: Break off a leaf and look for the characteristic white sap which comes out of the leaf stalk.

Norway maple is prevalant in much of Europe from Norway and Sweden to the Caucasus Mountains, Turkey and Iran. It was originally introduced into North America by John Bartram who received seedlings from London in 1756. He went on to sell Norway maples from his nursery in Philadelphia. George Washington ordered two Norway maples from Bartram for his garden at Mount Vernon in 1772. When Dutch Elm Disease wiped out maples in cities across North America, the Norway maple was often planted as a reliable and rapidly growing replacement, which could withstand city pollution.

The Norway maple produces large numbers of seeds, which are typical maple keys, but with the two wings at almost 180 degrees to each other. These seeds mature in September and are spread by the wind. They can germinate even in dense shade, and the seedlings grow quickly. 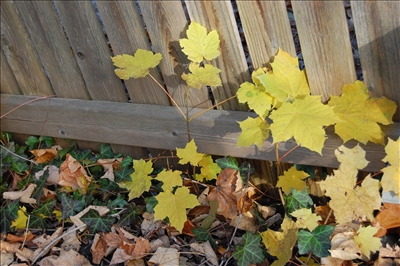 Norway Maples can out-compete other native trees. They leaf out earlier, and the leaves remain longer into the fall. They tolerate shade themselves, but create deep shade underneath where little else can grow. They suck up water, so that the soil underneath becomes dry. They may also be allopathic, producing chemicals which prevent native plants germinating. This sets the scene for soil erosion. A typical comment is that the tree looks healthy, but the ground underneath is a mess and needs work. However, it is almost impossible to grow anything in the shade of a Norway maple. In Toronto backyards some people have given up ad installed plastic turf for their children to play on!

Smaller seedlings can be removed by hand, and saplings can be dug up. Larger trees may need to be felled by professionals. If girdling or cutting are used the tree must be treated to prevent resprouting. Removing a mature tree to prevent it being a seed source for nearby natural areas is desirable, but can be a major and expensive undertaking. In some cases all that may be possible is to remove some of the lower branches to allow more light through and to reduce seed production.

Some US States including New Hampshire and Massachusetts have banned Norway maples. It is considered invasive in CT, DC, DE, IL, MA, MD, ME, MI, NH, NJ, NY, OR, PA, TN, VA, VT, WI, and WV.

Norway Maples are widely sold in nurseries, and many landscapers consider them to be reliable hardy shade trees which they recommend to clients. There are many commercial cultivars, such as the purple-leaved “Crimson King” and a variegated cultivar. Be careful requesting a “Red Maple” as an alternative to a Norway maple, as you may be sold the “Crimson King” version of Norway maple, which has dark red leaves, rather than red maple, Acer rubrum, which has green leaves.

The Norway Maple will continue to invade forests across the United States unless the spread is controlled. Because seedlings can survive in deep shade for decades, any attempt to eliminate the Norway Maple would have to be carefully monitored for over 100 years.”

If nothing is done regarding the invasion of the Norway Maple we predict that in years to come there will be strong homogenizing of the Maples in forests across the United States. In extreme cases, this would lead to much more plant extinctions, and losses of compatible habitats for animals.”

In an appropriate location, periwinkle is an attractive low-lying ground cover, with small dark green evergreen leaves and pretty pale blue flowers in spring. It tolerates shade and spreads slowly. 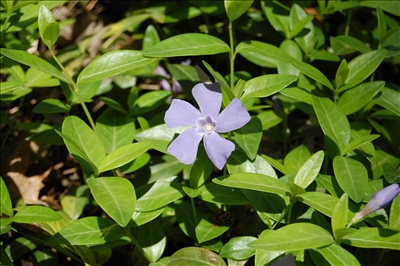 It was introduced to North America from Europe in the 1700’s.

Common periwinkle poses a threat to native plants and communities because it grows vigorously, forming a dense evergreen ground cover that displaces and excludes most other plants, including native wildflowers. It spreads vegetatively in the immediate area, and is not spread by seeds.

The US Department of Agriculture Forest Service nominated periwinkle as a “Weed of the Week” and reported that it is invasive in the following American States: CA, CT, DC, DE, GA, IA, IL, IN,KY, MD, MI, NC, NJ, NY, OH, OR, PA, RI, SC, TN, TX, VA, WA, WI, and WV. In Canada it is mainly a concern if planted in rural properties where it has the opportunity to spread into woodlands.

Periwinkle can be removed by digging, raising the runners with a rake, and mowing the plants. All of the plant must be removed. It can also be controlled by cutting the plants in the spring followed by applying a herbicide to the regrowth.

Widely available, including some variegated cultivars.
The US Invasive Plant Atlas Web site recommends many native alternatives, including:

These are similar small trees with long silvery leaves. In summer the scales fall off Autumn Olive, which becomes greener, while Russian Olive remains silvery. 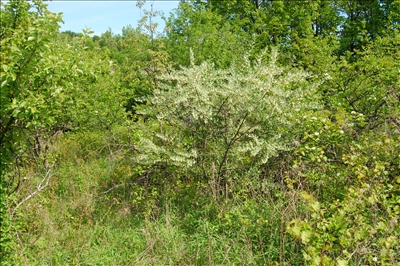 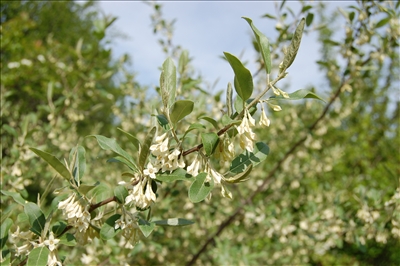 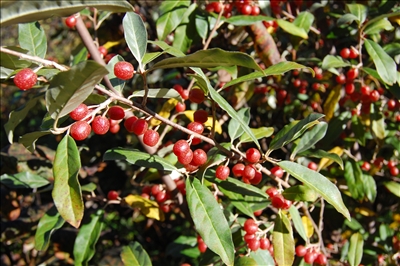 These small trees were valued as ornamentals due to their silver coloured leaves, tolerance of drought, and ability to fix nitrogen, which allows them to grow on poor soil. They were imported into North America from China and Japan the 1830s and recommended for for wildlife habitat, mine reclamation, and shelter belts.

In Montana, Russian olives have crept to the river banks and invaded irrigation canals. One farmer reported that Russian olives are a water-sapping nuisance that have overtaken between 200 and 300 acres of grazing land along his mile or so of river frontage.

In places they’re so thick you can’t get through them.

When it’s time to bring the cattle up from winter pasture near the river, two-inch thorns cut horseflesh and human skin.”

Russian Olive plants are available from many North American nurseries, and seeds can also be bought over the Internet.

It is shade tolerant and spreads widely. Ivy can become arborescent and grow up to 50 metres (150 feet) up tree trunks. 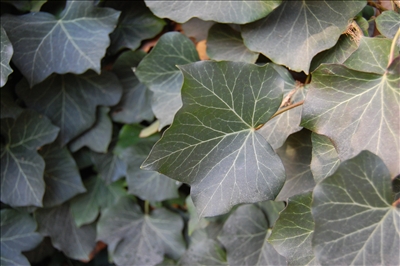 Came to North America from Europe in early colonical times, and became widely planted as an ornamental.

In an appropriate climate it can become invasive, creating an “Ivy Desert”, as it provides little in the way of cover or sustenance for native creatures. It can invade forests and force out native vegetation, and climb trees. By adding to the weight of trees it increases the chance of storm damage. It is especially a problem in the Pacific Northwest and in parts of British Columbia. It is considered invasive in AL, AZ, CA, GA, HI, IA, MD, NC, OR, PA, RI, TN, WI, and WV.

It can be removed manually but this takes a great deal of effort. In Stanley Park in Vancouver, B.C., the “Ivy Busters” estimate that in their first 39 “Ivy Pulls” more than 700 volunteers removed more than 20,000 square meters of ivy. They expect it will take 50 years of continuing effort to rid Stanley Park of this invasive pest. In Oregon the “No Ivy League” has organized over 205,900 volunteer hours over 15 years, and rescued 57,000+ trees from the “wretched grasp of English ivy”. They have removed over 267 acres (over 11.5 million square feet) of ground ivy from Forest Park and the surrounding areas.

The removed Ivy must be carefully disposed of in a landfill or incinerator to prevent it regrowing at a new location.

If herbicides are used, repeated applications are often necessary. The waxy leaves make it difficult for herbicides to work.

In some area blow torches have been used to burn ivy.

No biological controls are widely used for English ivy control. English ivy seems to have few pests in the United States

Many types of English Ivy are widely available for sale at nurseries and garden centres across most parts of North America, and landscape companies continue to use it in commercail and residential projects.