Maintaining conservation lands is a prodigious responsibility but the rewards are equally great.  While relatively small, NANPS properties are home to a number of rare flora and fauna and we are justifiably proud of our efforts to protect them.

If NANPS is to continue adequately managing these lands, however, we need your help.

On May 25th 2013 three board members (John, Alice and Miriam) visited the NANPS conservation property at Zinkan cove. We were accompanied by four other NANPS members, and led by Bob Barnett and Bill from the Escarpment Biosphere Conservancy.

It was a cool day, but with bright sunshine and no bugs! We entered the property by a snowmobile trail that comes out into Georgian Bay at the north-west corner of the NANPS property. The trail itself was interesting, as there were columbines and gaywings (fringed polygala) in bloom. 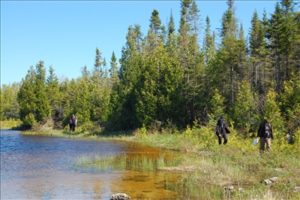 This 12 acre (5 hectare) alvar on the west shore of the Bruce Peninsula was brought to NANPS attention by then Treasurer, Trish Murphy, in 2003.  The purchase was brokered by the Escarpment Biosphere Conservancy, which now holds an environmental easement on the property.

Undeveloped shoreline is very rare on Lake Huron.  Although the property is a designated Area of Natural or Scientific Interest (ANSI), the threat of development encroachment was very real.

In October 1992, NANPS, then the Canadian Wildflower Society, had the opportunity of purchasing of rare piece of Carolinian forest in Norfolk County Ontario. With the help of a $10,000 grant from the Ontario Heritage Foundation, a large donation from an anonymous donor, and the stalwart fund-raising efforts of our members, we were able to acquire this amazing woodland.