In October 1992, NANPS, then the Canadian Wildflower Society, had the opportunity of purchasing of rare piece of Carolinian forest in Norfolk County Ontario. With the help of a $10,000 grant from the Ontario Heritage Foundation, a large donation from an anonymous donor, and the stalwart fund-raising efforts of our members, we were able to acquire this amazing woodland. 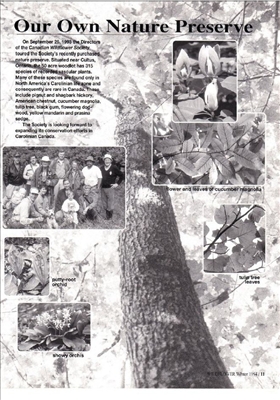 The 50 acre property is part of a larger forest. It is NANPS hope to eventually expand the property to encompass the minimum 175 acres recommended to provide optimal habitat for core forest species such as the Acadian Flycatcher and Hooded Warbler — rare birds that are known to nest in Norfolk County.

Shining Tree Woods is an outstanding example of relatively undisturbed Carolinian Woodland. The primary value is attached to the flora, with ten nationally rare plants found on the site; forty regionally uncommon species; and five regionally rare plants. The initial survey of the property over the years 1991 – 1992 found 296 species of plants and a number of unusual fauna.

Our approach is to be “minimalist”, to seek to preserve and protect the inherent natural values of the site with as little intervention with natural processes as possible. Our main objective is to preserve and maintain the Magnolia acuminata and other rare and endangered species that are found on the property. These species include: American Chestnut, Tulip Tree, Black Gum, Pignut Hickory, Putty Root Orchid, Yellow Mandarin, Board Beech Fern, Carex pracina, and Panicled Tick Trefoil.

Logging and the use of biocides is prohibited in the woods and the adjacent old field which is currently being left to naturally regenerate. In rare cases, it may become necessary to down selected trees for safety reasons or to optimize habitat for the shade-intolerant Cucumber magnolia. These cases must be presented to the full Board for individual consideration. The fallen tree(s) are to be left insitu to replenish soil nutrients and provide micro-habitat.

Shining Tree Woods is one of only eight habitats in Canada, and one of only three in Norfolk County, where the Cucumber Magnolia tree is regenerating naturally. The Ontario Ministry of Natural Resources has called this a critical habitat for the species. It is our hope to encourage increased regeneration within the woods and woodland edge in order to achieve the Species Recovery Plan goal of 50 mature, naturally regenerating, individual specimens within 25 years. 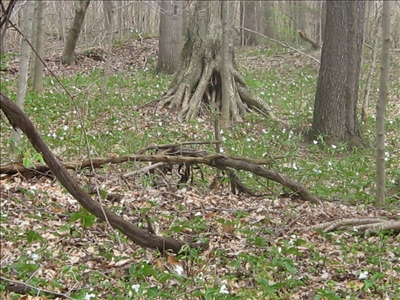 Magnolia acuminata is the only magnolia species native to Ontario. It’s large greenish-yellow flowers are pollinated by beetles and other insects causing red, fleshy – cucumber-like pods – to mature in late summer.

Cucumber Tree has been designated an endangered species since 1984, being found in only two disparate areas of Ontario (near Pelham and Simcoe), and with a critically low number of reproducing populations. It is listed under the Canadian Federal Species at Risk Act and regulated under Ontario’s Endangered Species Act, which provides protection to the tree and to its habitat, and under Ontario’s Provincial Policy Statement which prohibits development or site alteration in its significant habitat.

Globally the species ranges from northern Georgia to south-eastern New York, with outlying populations also occurring in Florida, Indiana, Illinois, Missouri, Oklahoma and Louisiana. While Globally secure at rank G5, it is ranked as S1 (Critically Imperilled) in Indiana, Oklahoma, and Florida and S2 (Imperilled) in Ontario. Only two States list the species as secure, Pennsylvannia and North Carolina, while it is unranked in the remaining [NatureServe, 2004]. Of the 283 reported trees and saplings, 33 (12%) occur in Shining Tree Woods.

Habitat Fragmentation is listed as a threat in the Species Recovery Plan for Cucumber Magnolia, due not only to direct threat to the forest tree, but to its pollinators and seed dispersal (likely via birds). It is NANPS hope to raise sufficient funds to purchase or acquire conservation easements on both the adjacent wooded areas and agricultural lands surrounding the woods.

The Species Recovery report recommends a “landscape level approach” to natural heritage values which corresponds with NANPS management plan. Objective II of the report (Objective I, protecting habitat, having been achieved in STW), is to raise the population size in two sites within each of the two regions to 50 reproducing individuals by 2032. It is our goal to have Shining Tree Woods be one of those sites.